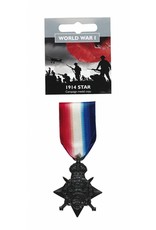 Also known as the Mons Star, this medal was awarded to the British and Indian Expeditionary Forces who served in France or Belgium from 5 August 1914 to midnight 22 November 1914 (from the declaration of war to the end of the First Battle of Ypres).

For collectors, researchers and anyone who wants to remember the brutal first steps of the trench warfare.

The reproduction full-size 1914 Star medal is supplied with a ribbon in a clear medal wallet. The information on the card describes how and when the medal was awarded.