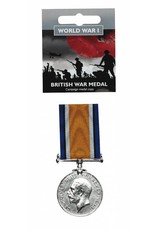 The British War Medal awarded to officers and men of British and Imperial Forces who entered a theatre of war or served overseas during First World War. The astonishing number of 6.4 million medals were issued.

A representative medal to join your collection or complete your 'Pip, Squeak and Wilfred'

This reproduction full-size British War Medal is supplied with ribbon in a clear medal wallet.
The information on the card describes how and when the medal was awarded. 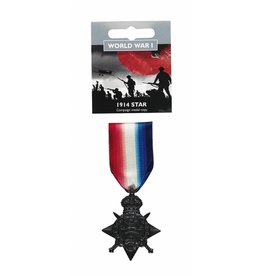 A fantastic reproduction of a full-size 1914 Star medal, ideal for those wanting to learn more about medals and their significance
Add to cart
1914 Star Medal Replica
£15.00
Please accept cookies to help us improve this website Is this OK? Yes No More on cookies »